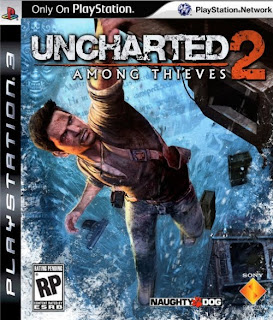 For those not in the know or living under a rock, Uncharted 2: Among Thieves is the very highly anticipated sequel to the 2007 hit Uncharted; Drakes Fortune. While it’s only been 2 years since the 1st game in the series, the people over at Naughty Dog have been toiling day and night to bring us one of the best games available today.

To recap Uncharted: Among Thieves has you in the role of series protagonist Nathan Drake chasing the footsteps of Marco Polo on his quest for the fabled Shangri-La. During his quest, Nathan finds himself in a variety of locales from a museum to a warzone. Helping him along the way is femme fatale Chloe. Chloe is a slick and sexy chick with an attitude – exactly a polar opposite of the original girl next door Elana.

Nothing has seriously deviated from the original because as the old saying goes “if it ain’t broke, don’t fix it”. They have however tightened up the controls a little and added trophies that earn you money to be used in the game for a variety of costumes – the ability to give yourself any weapon at anytime and even some game modifiers (only usable in a difficulty you’ve already completed). I loved this new feature and it actually has me obsessing over the treasure hunt this time around.

Another fantastic addition are the new multi-player modes. You get your typical deathmatches but they’ve added some co-op modes as well. In the Co-op modes, you and 2 other players can either play through some of the scenarios from the single player campaign or survive against hordes of AI player. Personally I love the Gold Rush mode that has you running around trying to take a treasure from point A to point B while being hunted down by wave after wave of bad guys. In addition to the Multi-player modes, as you level up online, you earn money much like the single player campaign that allows you to purchase personal modifiers, player skins and weapon upgrades – Once again I’m obsessing over levelling up online to be able to buy some of these things.

This time around I found the story was even better than the 1st game. I had no issue with the cursed Nazis of the first game because it gives the story a bit of a mystical tone – after all, they are hunting for fabled locations and treasures. I still consider Uncharted:Drake Fortune to be one of the best stories told in a gaming series but Uncharted 2 takes the AAA story telling to new levels of excitement and intrigue.

The graphics and sound engine have even gotten a bit of an upgrade (pay close attention to the snow effects – AMAZING). This game is truly something to behold. It’s hard not to just wander around marvelling at the beauty and detail of this game all the while bullets fly past your head at every turn.

Every couple of years a game comes out that truly defines the current generation of consoles and Uncharted 2 happens to be that title for this generation. What Uncharted 2 does better than anything out there right now is give you a balls to the walls non-stop action game that’s completely satisfying on all fronts. If this isn’t in your PS3 right now, you’re doing yourself and your PS3 a great injustice.

Feed Your Console gives Uncharted 2: Among Thieves a 10 out of 10

* Thanks to Sony Canada for supplying Feed Your Console with a review copy of Uncharted 2: Among Thieves