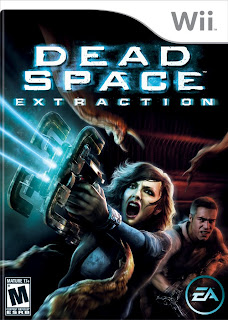 Since it’s conception I’ve been waiting patiently for this games arrival. Skeptical on how this would work on the Wii, I have to admit I almost didn’t want to drop the 50 bucks on a Wii title. Now with that said I have to say, this game would be worth 60 if requested! Dead Space: Extraction has to be, HAS TO BE one of the best games to come out on the Wii for quite some time and will easily be one of the games to beat as game of the year for this console.

The graphics and sound are outstanding. The storyline plays out as a prequel to EA’s first bout with Dead Space. Normally prequels are whack, agreed… but this one is a must have for any Dead Space fan. Not only does it start off exactly where the comics (animated and paper) started off in the past, but it also has references to characters and events that you’ll remember from the 1st instalment. As a bonus, play well enough in each stage and you’ll unlock bonus material like the original DS animated comics (just mentioned above) originally available as DLC on XBL and PSN. Awesome.

Let’s get down to the controls, my biggest pre-concern. How can a game that was originally designed to be played with 8-9 buttons work on a Wii-remote?… quite well actually. What EA and Visceral Games decided to do was start from scratch, creating a new and unique experience. Extraction plays as a rail game similar to the Resident Evil titles on the Wii. There are moments when your given a timed “free look” to pick up items with your telekineses ability. It’s just long enough, yet just short enough for you to almost always have to choose what to go for first. What this does is make you want to re-play certain chapters, which you’re allowed to do easily to pick up missed audio logs, etc. Overall the game has a very arcade-like feeling where you can have a 2nd player jump in at anytime and your stats on kills, etc rated at the end of each stage between each other. Awesome. Arcady most def does not mean kiddie. This game is rated M for good reason..it’s terrifying and I loved every ridiculously gory bit of it. The screams, the soundtrack, lighting, textures..everything was well done. Everything. Icing on the cake are the Wii centric controls like having to feverishly wave your Wii’mote at times to active a glow stick in heavily dark areas..again awesome!

In summary, I recommend this game if you have a Wii and have been waiting for some fast paced action. Heck if you don’t have a Wii..you should buy one and pick this title up!

– New innovative control schema created for this one of a kind game.
– Stays true to the Dead Space timeline of events.
– Game launch was supported by comic book pre-issue (check it out at your local shop).
– 2 Player co-op allowed.
– Choose your own adventure within the game at certain points, increases replayability by loads.
– Great voice acting and story.
– Worth_every_penny.

– Levels were short.
– Hard collecting all the audio files.
– Having to wait til the next Dead Space game on any system, dar!

Feed Your Console gives Dead Space: Extraction an 9 out of 10