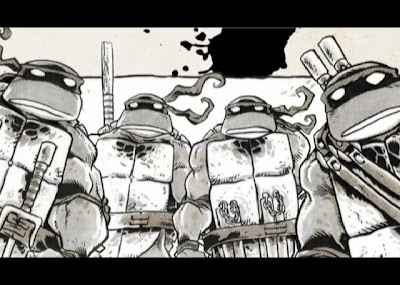 Did someone say Pizza?

Donnie, Mikey, Leo and Raph are back and they are ready to smash everything in site. But they are not alone this time they have a few new friends tagging along; Zen like Master Splinter, the nosey reporter April O’neil and the urban jock Casey Jones. A number of other classic TMNT characters will also be found through out the game – the Shredder and Foot Clan member Karai will be seen at several points through your story.

From a playability mode this game relies heavily on the strength of the multi-player matches, as the story mode was incredibly short and barely lasted the length of a television episode. Good thing you can play through with all 6 of your primary characters. The controls are simple and the make good use of the Wii mote and the Nunchuk. However The real fun begins with a 4 person battle in a 2D world. Battle your friend locally or take to the Wii network for some online smashing shenanigans.

Graphically this game is fairly standard for the Wii. Black and White Cut scenes (shown above) and bright colourful settings for each battle provide a number of great back drops which include multi-tear settings and destructible objects (in some cases the environment is more dangerous than your opponents. Watch out for falling power-ups they are as good for you as they are your your opponents and the AI loves to get them before you can.

Musically this game left me with a feeling of a one SNES title – short music clips that play on rapid repeat, coin counting point totals and the same tag line for each battle, but the actual sound effects of the game are quite good while your actively battling.

Overall I found this to be a very average 2D fighting game, which is actually to bad consider what could have been. Please bring back the old side scrolling TMNT game from 1989, and give it the remake it rightly deserves.

Feed your Console gives Teenage Mutant Ninja Turtles: Smash-Up a: 6.5 out of 10.