WOW! What a show today from the team over at Microsoft Canada. Putting the Xbox CA community and press in to Gamer paradise. Hosted this year at This is London we were treated to all the latest titles for the upcoming fall season. Here are my Hits and misses: 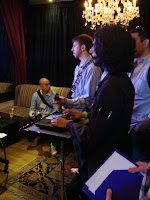 DJ Hero Hands On – If I had to pick one word to describe this game – Amazing – would be my choice. Clearly the standout winner for me this year. The Turn table controller just feels god in your hand – it’s not over complicated and it was easy to pick up. Two tracks three buttons (right track, center sound effects and the left track), a moving game pad and the left right fade. It just felt comfortable.

Who will love this game? Guitar hero fans and DJs. Best Part… 11 Tracks with Daft Punk as playable characters. 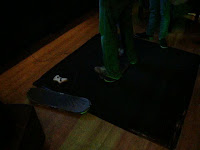 Tony Hawk Ride Hands On – Jump on the board and go. Yeah it’s actually a skate board without wheels. I first hit the time trial and found that unlike riding a bike getting on a skate board (even a fake one) is not like riding a bike. Racing down hill collecting time clock bonuses and penalties. Then is was off to teh half pipe – defiantly better for me than time trials. Rock back and forth on the board and interact with the four sensors to trigger tricks and score bonus points.

Who will love this game? Anyone that loves the Skate culture.

Splinter Cell Conviction Watch – This game looks amazing, even in the early builds that were on display and being run buy the game devs displayed a number of the cool things that make this look like a winner. Hiding in the shadows, using the environment and brute force will be the tools of the trade for this one. Great visuals and cool kills all from the 3rd person POV.

Who will love this game? Stealth and 3rd person shooter fans.

Left 4 Dead 2 Hands On – What more can you say about Left 4 Dead? Great game and L4D2 is no different – new melee weapons and enemies to keep you guessing – more zombies and an AI that will change the difficulty of the game based on your teams performance. This way the game will be more difficult for rockstar teams and easier for the n00bs.

Who will love this game? L4D and horror fans won’t want to miss this – and get over the whole DLC vs a new title debate – this looks to be worth it from my short session behind the gun.

Forza 3 Watch – I’m not much of a racing fan but I was blown away by the graphics on the latest Forza title. Clean, crisp and fast this game will be a winner with many.

Beatles: Rock Band, ODST, and The Ballad of Gay Tony – While these were all present I have had enough hands on and visual time I skipped them all together – great titles all in their own right but not a whole lot new at this point.

Missed: Modern Warfare 2 and Twitter/Facebook integration – These both needed appointments to play and all the times were well booked before I arrived. I’ll be at another event next week and will try to catch MW2 then.

A great event – lots of love from the Xbox Canada Community and the Team at Microsoft Canada… This holiday is going to be a heavy hitter on the pocket books – get ready now.