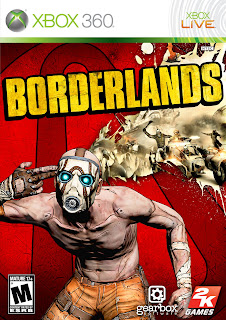 For those of you not in the know, Borderlands drops onto retail shelves October 20th for the Xbox 360, PS3 and PC. While our coverage has been sparse that’s not to say we’re not looking forward to the title. The first title in a planned franchise comes to us from Gearbox software and the fine people over at 2K Games.

Borderlands is a SciFi FPS (First Person Shooter) with RPG elements and a vast array of features that shoudl easily prove this title to be a game that every game should pay closer attention to. The feature list is awesome with 4 player online co-op (jump in and out seamlessly), Vehicular combat, enough weapons to make Schwartznegger tear up with joy totally randomized item drop system that reminds me of Diablo and some eye popping graphics.

We took the liberty to round up some media in anticipation of this title. Personally, I think this game could well be on it’s way to being one of the best action titles of the year and it kind has a Fallout 3 on steriods feel to it.

Have a look and lets hear …read…your comments.