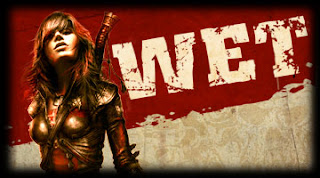 What can I say? I’m a sucker for a girl with a dirty mouth and a take no sh!t attitude so it should come as no surprise that Rubi is my kind of girl. As I previously said in my first impressions review, this games ends up being some “good old fashioned fun” but, while the groundwork has certainly been laid that’s not to say that WET doesn’t have a few pitfalls that prevent it from being a truely incredible gaming experience.

The story puts you in the shoes of killer for hire Rubi Malone as she helps to solve other peoples “problems” with her handguns, shotguns, SMG or samurai sword. The game feels and looks like a 70s style Grindhouse movie, complete with all the hisses and pops on the video to the wild and nasty gore with a little sexploitation tossed in for good measure. As Rubi, gamers rush headlong into a variety of locals that span across the globe to face wave after wave of enemies in an attempt to exact vengeance for being wronged.

The acrobatic gunplay has Rubin running up walls and sliding across surfaces as she deals death like the pro that she is. Through the game, Rubi earns style points that allow her to buy upgrades for her weapons and techniques.

I love the dirty grimy grindhouse effects and the music but something about the dialogue doesn’t sit well with me – It sounds poorly written and not in the intentional way that House of the Dead Overkill was, WET just seems unpolished to a degree.

My biggest complaint is while I thought the story was progressing in a feverish pitch, it was over too suddenly. It just kind of built and built then “BOOM” all over – I was shocked to see the credits come up when they did and the first thing I said was “That’s it? That’d effin’ BS. Where’s the rest….AWW MAN!! That’s some seriously weak sauce.”

In the end I feel that the developers at A2M in Montreal (just a stones throw away for me) was rushed to finish the game. I’m not sure if it had something to do with the Activision previously being slated to be the publisher or if they just ran out of ideas. I’m thankful that Bethesda picked this title up otherwise we might have never met Rubi and the colorful cast of characters in WET.

If you want a good old fashioned fun and gun game that requires little brain power (I seem to enjoy lots of those) then you just might want to get WET. I’m hopeful for a sequel to this title and think that with just a few tweaks and changes, we could all be in for a long time love affair with Rubi and her brand of “Monkey Business”.