IMHO – Weighing in on the Cobain/GH5 Controversy 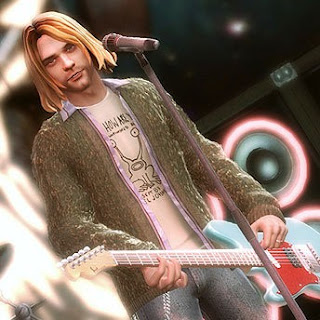 When I heard that Guitar Hero was going to be home to a digital version of 90s grunge rocker Kurt Cobain I’ll admit that I thought it was pretty cool and puzzling at the same time. While I thought that it’d be fun to see him perform a few of his best songs, if only in a digital format, would he have wanted to be in the spotlight like this? Probably not but hey, his wife and former bandmates signed off on it — I thought wow, maybe Courtney is softening a little bit this is great — so they obviously saw some merit in doing so right? Apparently not.

Shortly after the release of the game, Courtney Love went on a tirade of comments via her Twitter account saying things like “we get NO money for this, travesty, Frances gets NO money for the rape.” and “not in twenty JILLION years would i EVER have allowed this and this islethal.”. She even went so far as threaten to “sue the s**t” out of Activision. Apparently Courtney is really just cheesed off over the fact that Cobain is an unlockable character that you can set to have as the singer in your band and she doesn’t like some of the songs that he performs.

When asked about this Activison stated “Guitar Hero secured the necessary licensing rights from the Cobain estate in a written agreement signed by Courtney Love to use Kurt Cobain’s likeness as a fully playable character in Guitar Hero 5”. I understand that Kurt was very likely not a big fan of Bon Jovi (as an example), but, something tells me that Johnny Cash wasn’t much of a fan of Nirvana’s.

I’m a member of the generation that thought of him as their voice and I can honestly say that while I loved his music and he was a voice for my generation, that stopped the instant he committed suicide. It was a cowardly thing to do to his wife and baby daughter – forget the fans. Further to that point, his wife, sure isn’t helping to preserve his legacy much with her non-sensical babblings, public displays of outrage and lawsuit threats about all things Kurt Cobain.

She (Courtney Love) signed off on the use of his likeness and was even involved in some aspects of the creative process in bringing him back to life in the game. In doing so, she may have opened him up to a new audience Nirvana may have never really gotten ahold of which is a good thing but I’m afraid that the party in all of this whose being hurt the most by this is their daughter Frances. She is part of the gaming generation and I bet that she was pretty excited about seeing her father portrayed in a game such as Guitar Hero.

All I’m trying to say is “Sleep it off Courtney. It’s just a game, and, as a fan of Nirvana’s I’m thankful for the music and having him as a playable character. Sober up, Grow up and Lighten-up. You’re only hurting your daughter and further tarnishing his legacy”.

I predict that Activision will cave to Miss. Love and lock Kurt to just the Nirvana songs but I just won’t be playing GH 5 online or with Xbox live turned if that’s the case.