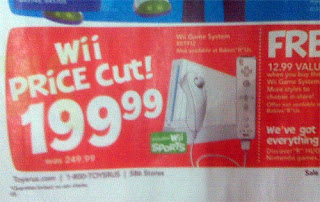 Looks like Nintendo is poised to drop their ever popular wiggle waggle system by $50 to 199 sometime around the endo of the month as evidenced by a leaked image from Toys R Us. As of this time, Nintendo has yet to confirm nor deny the cut which in my opinion just isn’t enough especially with the power and options that come with the PS3 or the 360.