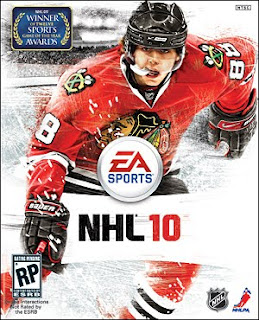 Last years version of the wildly popular NHL series was deemed by many critics as “The best sports game ever”. Having said that, the people at EA Sports had alot to live up to. I’m happy to say that despite some of the issues I have with the game (lingering gripes that carried over this year), NHL 10 seems to have retained that title this year.

The biggest changes that veterans of the series will notice is the new “Board Play” and the after the whistle shennanigans. Board play is basically when the players jockey and fight to regain control of the puck against the boards by kicking at the puck or slamming each other against the boards and pinning them there. Something that all players of this series do is to continually knock the other team around after the whislte, which until now, didn’t get a reaction. Now you can pick on the team but they’re not taking your crap and they hit back or even challenge you to a fight.

Speaking of fights – EA is still trying to find out the best execution to the in-game fights. Now the camera moves to a 1st person perspective which is a nice change and you use the analog sticks to control the fistcuffs which in my opinion doesn’t really work all that great but they’re on the right track.

The graphics really haven’t deviated much if at all which is fine by me but one of the things that I was really hopeful for was the presentation of the game. It’s time to update the overall presentation to make it look like a real hockey broadcast and get new commentary. Maybe even have someone like Pierre McGuire who is an amazing hockey minded person provide some feedback to the player after each period. Perhaps even add something like this to the “Be a Player” mode much like the college career in NCAA 10.

I find that the game dishes out far too many penalties to the user and not nearly as many to the cpu which is something i complained about last year but noone listened to I just dropped the penalty calling down a shade. The features and gameplay modes are plentyful and intact with the GM Mode, career mode, and online leagues just to name the most important.

EA has done it again with NHL 10 – I love the board and after whistle play, the online leagues rock GM mode is tons of fun and the career mode is still fun. This game will no doubt be a mainstay in my 360 for many months to come.