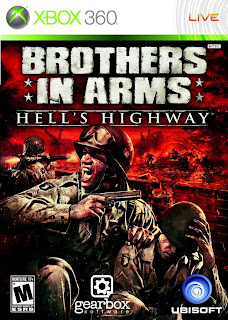 My fellow gamers, if you’re into the military genre then you more or less have heard of the Brothers in Arms series from gearbox. These boys (and girls) work hard to create the most realistic renditions of what war was/is all about and it shows. Definitely the underdog in the realm of the military FPS strategy genre, Brothers in Arms is due some respect. Especially since now a days I see this title going for as little as $20 bucks in some retail stores which is nuts and almost insulting!!

Ahem, let us begin. You’re Sgt. Baker, a soldier that’s been in the mix for at least 2 previous games (see and play both titles on the original Xbox. Sorry they are not backward compatible for some godforsaken reason). The plot is simple enough, well as simple as can be for a game based on real life war historical events – survive and get your men to successfully aid in clearing a path to victory against the German’s. It’s one small piece to a larger game series it feels, but this stretch in particular in this title was dubbed Hell’s Highway.

Gearbox stayed true to their cause with this 3rd instalment by once again locking down solid almost 100% accurate depictions of locales where these battles were fought and it shows. Characters feel and look real. You find yourself actually caring about them and their survival throughout just after a few cut scenes. That’s great story mechanics. The depth here gets even better. For history buffs when you find a recon point (which you can find fairly easily or via a cheat code wherein they’ll all be revealed for the remainder of the game), you receive a detailed account of certain events of the where you are in the game at that point and how significant it was during the actual time of these events. It all really meshes well and you can tell this game mattered to many people who put the time into it.

Gameplay is tight. It does take a good hour in to get use to the controls BUT, the new “dig in” feature is heaven sent. This feature like some of the newer games shows the player in a 3rd person view when in cover then zooms back into 1st person view when moving about, etc. It’s great how it all works and feels way more natural than the previous two installments. Gone is the extra step of pulling the right trigger to assign a battle command..instead simply left trigger and select a way point or battle command by point to targets then release. Soooo much easier. For those familiar with the series..I know you’ll agree. For those not, trust me..it makes gameplay quicker with less mis-commands sending your men accidentally into a barrage of crossfire. Very realistic in the sense that you do not want to make a mistake. It could be costly. For example, in a warehouse I was at some point, cleared both my teams to its exit point then I went back in it to find a special marker I knew was in there somewhere (think collectible dog tags, etc. like in other games). I killed all the baddies in there so I thought it would be safe to explore right? Wrong. I took so long the Germans re-established a squad and they ambushed me. I was too far away from my platoons in the warehouse for them to reach me in time, and my cover was shot away in minutes (the environment is reactive to gunfire). Needless to say, I didn’t make it out that day. Keep moving and never be too far from your crew(s).

Sounds stays true to most games out there right now of its type. With a full on nice system you can hear the crackle of gunfire all around you, planes flying above dropping bombs elsewhere and even the battle cries of you men across a field if they need your help or they barking at you to “get into cover” if they see you getting pelted. Less arcade like, very well done realistically overall.

I could go on and on about this game because i really believe it pulls off what it was aiming for. Followers of the series from Xbox days should be proud. If you found the 1st two instalments difficult, you should definitely give this a try. Gearbox listens, and has to some recommendations from it’s fans. To all the fast paced COD fans out there, I recommend giving this a shot..it’s a different blend of action, but it’s still takes strategy and when the action’s intense..its INTENSE. At less than $30…this is a steal. It’s a great testament to those that put their lives on the line to protect their respective countrymen and freedom.

– Great representation of it’s genre in a realistic, yet still fun, way.
– Challenging, but more so like a good chess match.
– Improved gameplay mechanics than previous instalment (ex. “dig-in” ability)

– This may be the last BIA gearbox releases. I hope not.
– Some may find it too difficult. COD players should not.
– The option to unlock cut scenes and replay them is missing. Huh?
– Wars sucks!

Feed Your Console gives Brothers in Arms: Hell’s Highway a score of 8 out of 10.