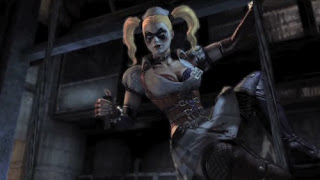 Batman has had many great successes in comics, movies, cartoons and even TV shows (gotta love Adam West) but he’s never ever been properly represented in a videogame. Eidos and developer Rocksteady hope to change that stigma for the Dark Knight with a 3rd person adventure in Arkham Asylum.

The story begins with Batman as he takes the Joker back to Arkham Asylum after apprehending him a little bit too easily. The Joker manages to break free and locks down the entire facility with the help of the blazingly hot Harley Quinn. As Batman the user embarks on a long journey through the pits of Arkham Asylum during the Joker’s reign of terror.

The gameplay is your very typical 3rd person perspective view with simple yet completely accessible and effective fighting mechanics. Through combat, experience is earned to allow for upgrading the plethora of bat-gadgets at your disposal and combat skills. Each new section opened up tasks Batman with saving people, deciphering clues using his detective skills and figuring out puzzles left behind by the Riddler.

The first things any gamer will notice is that the presentation and graphics are top notch and to top that all off the voice acting is impeccable. The Joker really sounds like a crazed maniac and Batman sounds like a dark and brooding mystery man. Arkham Asylum is huge and damn spooky with it’s dark corridors, dirty rooms and the constant threat of being attacked by the Jokers goons or any of Batman’s incarcerated supervillians as end bosses.

The upgrade systems for Batman’s Suit and tools is easy to understand and allows you to use these items in new ways; guided batarangs (6 axis), suit upgrades and even new combos and throws to help you beat down the Joker’s goons.

With it’s incredible presentation, spot on voice acting, exciting gameplay and easy fighting mechanics, Batman – Arkham Asylum is a winner. This is truly a title that’s worthy of any gamers time. While the replay value may not be as high as some, seeking out the Riddlers challenges and traversing the various locales inside Arkham Asylum – this game is fantastic.

Feed Your Console gives Batman: Arkham Asylum an 9 out of 10

Could this be the Game of the year? Only time will tell.