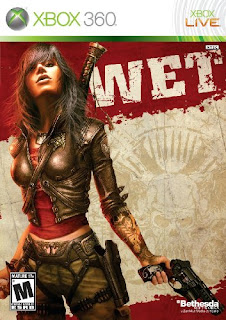 They say that first impressions are the most important – and when I first saw video footage of WET – I was less than impressed. To me it looked like a cookie cutter action game with an over abundance of “Bullet Time” slow-mo gameplay akin to the Max Payne series. I had then heard that Activision, who was originally slated to release the game, had dropped out in late spring of 08. While it’s possible I had heard this before, it didn’t resonate with me because to be honest, I didn’t care all that much.

But then in April this past year, Bethesda Soft works announced that they’d be publishing the game. Then I became hopeful that perhaps with some extra TLC, this game could shape up to be something special.

Today the Demo dropped on Xbox Live and I’ve now spent a good 3-4 hours playing the same sequence of levels over and over and now I do believe that the second impression has become more important than the 1st. WET has you in the roll of femme fatale Rubi and she is as deadly as she’s blazing hot (voiced by Eliza Dushku – Faith in Buffy the Vampire Slayer. Ya – HAWWWT!).

The game looks to have a very film noir/Grindhouse presentation. The graphics are pretty but grainy in that 70s style of film genre with copious amounts of action and gore. The game play is similar to that of Max Payne in the 3rd person perspective with plenty of bullet time action sequences that reek of so much style it’s almost sickening – from the sliding dual gun kills to the Berserker(?) mode Rubi enters half way through the demo where the screen is all red, black and white with it’s cell shaded graphics.

The demo in total is only about 15 minute in length but it should give you a good idea of what to expect in the game and I can only assume there are plenty more stylish kills and more over the top action sequences. I’m unsure of what the story will entail, but it looks to be one of those games that just ends up being good old fashioned fun. I must admit that now that I’ve had the chance to play, I’m really looking forward to seeing what happens next.

WET will be available at store near you for the Xbox 360 and PS3 September 15, 2009. Expect a full review in the near future. In the meantime download the demo and let us know your thoughts.