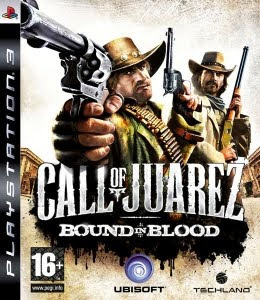 Enter the Wild Wild West… Meet the McCall Brothers: Ray, Thomas and William, three men on the run from their past. In this prequel to the 2007, Call Of Juarez you find the McCall’s under heavy fire, during the American Civil War, from the Union Army and the threat of losing their family home. Choosing Family over country they McCall’s abandon the Union army and head to their family estates… This is when all hell breaks loose. Join Ray, Thomas and William as they cross the southern states and venture deep into Mexico in search of the famed Aztec Gold rumored to be Montezuma’s ransom to the Spanish.

Each level has a detailed cut scene describing the time between your last mission and the next, providing a constant flow of information and clues to your next set of tasks. Choosing to play as either Thomas – with his silent knife and long range Rifle – or Ray – the duel wielding Pistol and explosive expert – will set different objectives for each mission. From hiding in the surrounding environment and using your knives to silently kill the enemies searching for you, to setting the required charges to blow up the bridge protecting your allies. Each chapter will offer something different showcasing the skill of the brothers. William the youngest of the brothers, who is also an NPC, tags along with you and acts as your spiritual guide and conscience. Travel across numerous landscapes on foot or horseback in the desert on on the top of a mountain and even on a river in a canoe.

Game play is similar to most other FPS so if your familiar with these controls your going to be able to jump right in from the beginning and start blasting. The use of the D-Pad give quick access for a heads up weapon change or optionally the LB/RB toggles will take you around the wheel. With 6 different weapons configuations your never going to be short of options. Take Ray’s weapon choices for example – Solo Pistol (two slots), Duel Pistols, Rifle/Shotgun, Dynamite or a Pistol/Dynamite combo. Weapon upgrades can be found as you progress and Kill enemies or purchased from the General Store you encounter in town from the basic rusty pistols to the superb rifle. You’re going to want to spend the time to invest in these upgraded weapons as you progress to increase your accuracy and damage and decrease the reload speed for your guns. Take time getting to understand the reload speeds for your various weapons, I found that many times I was reloading and getting shot at the same time.

Other weapons you will encounter along your travels are the mounted chain gun and the cannon. Both of these weapons will take some getting used to – Cannons ball fly in an arced fashion – meaning you’re likely going to be short of your target the first several times your firing these as you need to adjust your aim to account for distance and the trajectory of the cannonball as it travels.

The enemy AI is intelligent and crafty attacking from cover and moving to hid behind walls or other cover. Unlike many other FPS where your Allied NPCs are more of a burden (dying or standing around not doing anything) your going to see actual help in combat with minimal babysitting. Solo side quests will appear from time to time where your traveling short distances to complete simple objectives like; find the stolen Items or rescue my daughter. Complete these for cash to upgrade your weapons and buy more ammunition (which is found in abundance as you play).

What would a western be if not for the High Noon shoot outs… Along your travels you will encounter several level bosses and sub bosses, during these encounters you will trigger these quick draw events. Move your character from side to side to keep your opponent visible and wait for the clock to chime… When you hear the clock be quick on the draw and leave your opponents in the dust.

Call of Juarez: Bound in Blood also offers multi-player games of “Lawmen” vs. “Outlaws”, in team challenges. Common multi-player themes include all the common team challenges you would expect, but with a western Theme, complete team objectives like: Rob the Bank and escape town and Deathmatch. Being Quick on the Draw and killing multiple opponents in succession will provide additional multi-player bonuses, rewards as given in the form of Poker hands from a pair for two kills to a flush for five… the more kills you can string together the better your poker hand and the better the rewards.

Do you have what it takes to Battle the Union Army, the Confederate Army, Mexican Bandits and your own families daemons? Find out with Call of Juarez: Bound in Blood.

Feed Your Console gives Call of Juarez: Bound in Blood an 8.5 out of 10