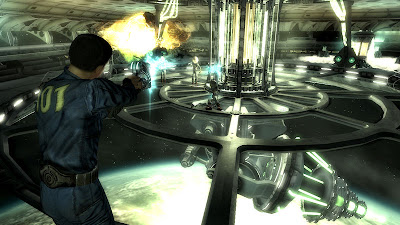 In what is presumably the temporary swan song for Fallout 3 fans everywhere, Bethesda released the 5th and final planned chapter for the aforementioned title August 3rd in the form of Mothership Zeta.

Again, with the tradition of not divuldging any spoilers, I will say that this is possibly the most combat intensive chapter yet. While on your journey you’ll encounter a few varieties of enemies that come in the form of Aliens, Abominations, and some robots. The level itself is quite large as there are various locations to find and things to see, encounter some new characters and make some friends along the way.

Due to the intense combat, if you haven’t yet maxed out at level 30, this is a levellers dream come true. The ammo and weapons are so plentiful in here that you needn’t worry much about how you’re going to survive the waces of pissed off alien assailants.

For only 800 MS ($9.99) Motership Zeta didn’t disappoint, with the additional 3-4hrs of gameplay, a plethora of alien weaponry and items, you must download this chapter. There’s just something about playing through this chapter that left me feeling a little melancholy – Being that this is the “last planned chapter”, this means that Bethesda is done with the Fallout 3 saga and that really makes me a little sad. On the otherhand, we can look forward to the previously talked about Fallout: New Vegas (Will have to ask about this) and perhaps a sequel will be forthcoming.

One other thing to note is that all you PS3 owners will soon be playing through all these awesome downloadable chapters starting in Sept. If you’re a Fallout 3 fan, you owe it to yourself to get each and every one the day they hit.

Feed Your Console gives Mothership Zeta: 9 out of 10