I have to admit, I went into this game with the bar set very high. God of War:COO after all was proclaimed to be the game to sell PSPs. An all new adventure for the unreluctant hero Kratos. I have to admit it met my need for fast paced action and then some.

Kratos is once again on a his revenge kick to combat the Gods. Visuals are as good as you’re going to get on the hand held, and that’s not a knock on the hardware at all, just the opposite. It’s one of the best games I’ve seen on the system to date. It’s right up there with the Socom series (also by Sony, coincidence, hmmmm…).

Gameplay is much like its PS2 counterparts. The only change in the gameplay is of course is the non-use of a right analog stick to dodge roll. Instead you simply depress both top triggers and roll by using the left stick, minor change. Some new magic abounds and it all just feels right. I especially love the edition of the shield trinket thingy you get along your travels. It comes in handy when you can’t find a bit of cover to save your heavenly hide in some pretty awesome heated battle. Speaking of battles, you’ll especially like the introduction of all new enemies, creatures, etc.

It truly is a new experience and one fans, as well as curious newbies, of the series should somehow maybe pick up a PsP for if you don’t have one already. Yup, it’s that good! For the budget conscious gamer, it doesn’t hurt that this is now a ‘Greatest Hits’ title that you can pick up for $20! 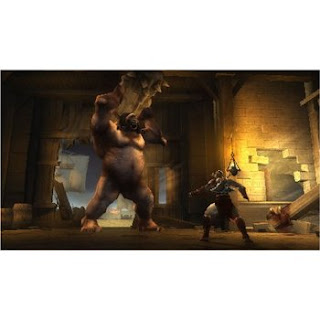 Bottom line…buy a PsP, then buy this game!