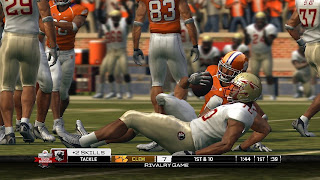 I love me some football – Especially of the college variety. The game just seems to mean so much more to these guys. They’re playing for their hopeful professional futures, their schools and pride – not the next big contract or the millions of dollars in endorsements. This is what really draws me to college ball.

It’s been about 2 years since I picked up NCAA Football, so I wasn’t sure what to expect this year having read nothing about it. Immediately I jumped into the “Road to Glory” (previously known as Campus Legend) and created myself a player. From there, they put you in the shoes of your player in the midst of the State championships tournament where you have to put on your best show for the college scouts.

After that’s done, the very hot Erin Andrews from ESPN talks about you and your play during the tournament speculating where you may decide to go. Once the decision has been made, it’s up to you to work your way up the ladder to the starting position by practising and performing events that include studying (keep that GPA up or you’ll be suspended) and training.

Further to that, 2 other features that really stand out are the Team Builder modes that easily and effectively puts you in charge of building a team via a website (for ease of use) and the “Season Showdown” mode which is really just a big online football pool where you pick a team and try to score the most points in a season. This sound interesting to me but not having any friends who are into NCAA, I might have some difficulty keeping up with the Joneses.

The presentation of the game is awesome – the stadiums are always full, the sounds is great with the Marching Band music that goes hand in hand with College ball games, the Mascot dances and the over atmosphere almost makes it feel like you’re there.

I’m not sure how well NCAA Football sells in Canada, but for all you fans of Football in Canada, you owe it to yourself to give it a try. For everyone else, this is a damn fine game that’s sure to keep you entertained if even until Madden comes out in August.

* The Atmosphere
* Road to Glory Mode
* Online gameplay, create-a-team and tournaments
* Erin Andrews – Hello – It’s Erin Freaking Andrews! Oh ya and her updates on your progress

* Some computer play calls are frustrating (ie: Kick a FG on the 1yd line with 20 seconds to go)