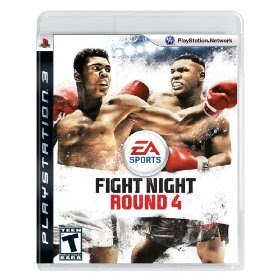 Long before UFC graced my television, I was big time into boxing. I played all the major boxing titles from Mike Tyson’s Punch Out! right through EA Knockout Kings to the Fight Night series. I used to love watching the old classics featuring Mohammad Ali, Joe Frazier and George Foreman, then I got really into Iron Mike Tyson. The man was an animal and I always wondered what it might be like to if Tyson and Ali could fight and EA has finally delivered that dream matchup.

Fight Night round 4 is the latest in EA’s wildly successful pugilism series. If it feels like it’s been a long time since you stepped into the squared circle, it’s been 3 long years since the last release and I really think the extra time off paid for itself in dividends.

Not only does this game look sweet and move with incredible fluidity, the actual gameplay was tightened up a little too. Now you really need to try and calculate your punches and blocks – gone are the days of button mashing thanks to the exclusive total control scheme which uses the thumb stick to execute punches and combos.

The game features 48 of the best boxers from today and years past including, Mohammad Ali, Mike Tyson and the recently deceased Arturo Gatti (who was taken far too young). Each of the boxers models are so painstakingly drawn out, it’s truely incredible. They move and fight just like their real life counterparts.

Creating a Fighter is the same fanfare as before – Not much has changed on that front but the amount of detail you can get to in creating the face is pretty incredible as evidenced by the online community where you can upload and share your created fighters. “Legacy Mode” has been marginally improved where your popularity can help build you up and get you those big prize fights.

With all the different weight classes, coupled with Create a Fighter and the online tournaments, you have alot of options to help keep the game fresh and exciting for a long time. If you’re a fan of realistic fighting and boxing as a whole, this is a title you must own.

* Not overly accessible to the casual gamer

Feed Your Console gives Fight Night Round 4: a 9 out of 10