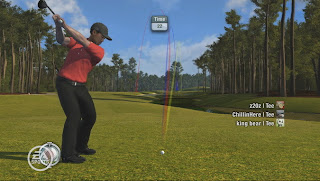 It’s that time of year again – the time of year when EA practically dominates the release schedule with their onslaught of the new generation of their popular sports franchises. NCAA 10, Fight Night Round 4, Tiger Woods 10 and next month Madden 10. As an armchair athlete, it’s my duty to play all of these titles and bring to you my verdict. Without further ado, I bring you Tiger Woods 10.

As someone whose only played golf a handful of times, I can’t even call myself a casual fan but something always drew me to this series. The 1st version I ever purchased was back in 2003 on the original Xbox and I was instantly hooked. The game kept me entertained for hours prompting me to get out and golf again (IRL) – I failed miserably and bent one of my new clubs in frustration. I’ve yet to play since.

Tiger Woods 10 kind of feels like that day back in 2003. It’s beautiful, it’s fun, yet extremely frustrating. If you’re a veteran of the series, you can rest assured that the very precise and comfortable controls haven’t changed at all which is a very good thing. They have however, changed up the putting a little. Now you actually get a meter that better allows you (in theory) to gauge the distance/power needed to make that long putt. I’m either doing something very wrong, or this has actually made it more of a distraction from the guessing of the previous few versions (which I actually liked).

That said, the game has so many features and options, novices and pros alike can find something they’ll enjoy in this game. Tiger Woods 10 features 16 of the most recognizable PGA courses, online tournaments that coincide with real life tourneys, USGA (US Golf Association) rules, Tournament challenges and even some wackier arcade-like things (pink bunny suits, over the top drives and attribute enhancing clothing).

Playing through a season with a created golfer (Using EA Gameface is an option) is enjoyable but don’t expect to win too much. The real pros will whip ass in this game much like they would in real life and that can also be frustrating. At one point, I was in the lead by 3 strokes and out of nowhere, Tiger gained upon me and ended up winning by 5 strokes. When playing tournament, you’ll often hear cheering in the distance and the commentators will notify you of what’s happening with an updated ticker at the top of the screen.

One of the coolest things I’ve ever seen in a game was the real time weather provided by The Weather Channel. While playing the game, as weather in your area changes so does the weather in game. For example on Saturday, it was storming out and in the game the same thing was happening. As the day brightened up and clouds disappeared, so did the game. Something small but still pretty cool.

All in all I would have to say that Tiger Woods 10 is a damn good game despite the frustrating moments and what I found to be off balance difficulty levels. I hear that this game is a huge success on the Wii with the new Wii Motion Plus. I’d be interested to play that one next and hear what any of you have to say about it.