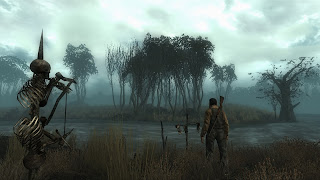 Once again, Bethesda has unleashed upon us a new chapter in the continuing saga that is Fallout 3. Point Lookout was released June 23rd for 800MS Points($10USD) for Xbox 360 and Games for Windows Live (PS3 versions coming soon).

The folks at Bethesda take their DLC seriously as this, while not their most ambitious release, is easily the largest and maybe even a little darker than any of the other quests in tone. Point Lookout has you boarding a boat and travelling to Point Lookout State Park in Maryland, a swampland locale teeming with new enemies, slack-jawed yokels and a pretty intriguing storyline I’d like to see explored further in later releases.

Keeping with the trend, I won’t divulge any information about the main quest, but I will say that Bethesda seems to have taken the difficulty up a notch with this one. The enemies you’ll find in here are a true test for all you Fallout 3 veterans. The enemies range from Backwoods rednecks that could make the guys from deliverance look like pansies in comparison and some newer more aggressive and powerful ghouls. I actually died plenty facing off against these new enemies and was really happy to see myself be done with them. I suspect that it won’t be the last we hear from these characters.

Bethesda really seems to be upping the ante with Point Lookout – It’s bigger (took me close to 4 hours to complete), adds more enemies, creates a really intriguing story that will hopefully be explored further and it really shows every other developers what it truly means to keep a game fresh and exciting.

Feed Your Console gives Fallout 3: Point Lookout a 9.5 out of 10