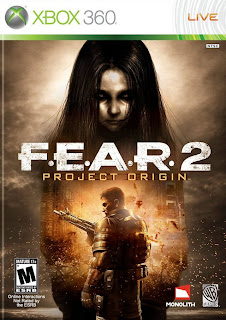 Alma’s back. If you’ve played the first F.E.A.R. installation you know who I’m referring to. If not, doesn’t matter F.E.A.R. 2 does a good job at starting you off with just enough to want to play on.

The gameplay is smooth yet sluggish at times (when walking it just felt like he was slow for no reason)…minor. For this type of game I can’t say too much on the plot, outcome, etc. but I am almost certain there will be a F.E.A.R. 3.

I really enjoy[ed] playing this title. It is what it, and at times it is quite good at getting you to jump out your skin (especially in the school). There’s replay value if you ‘Live’n it up. There are several new map packs out there for the masses. Graphics and sound don’t disappoint, however I’ve come to expect nothing less from this studio. IMHO, worth buying for 50 bucks or less.

* …however, most items you can use for cover still leaves your head sticking above it to be shot off. Hows that cover?! A false positive indeed.
* Controls take time to get use even though they are similar in lay out to other games of it’s type..some response felt sluggish especially when moving about exploring.