The DS has far too few rated M titles. GTA: Chinatown Wars is heaven sent. Extremely addictive playing style that any fan of the series, and non fans will, could and should love. You play the nephew of the current Chinese mafia boss in you’re particular part of town. Something to do with turf wars, etc. I think. I didn’t pay much attention to the detail in plot more so than just wanting to play and wreak havoc in Liberty City. I believe there’s some familial heirloom that was stolen and needs to be recovered for the family name and underground biz to go on proper.

I’ve played this for a few weeks now and can’t get enough. The graphics and animation are smooth and above avg for a DS game. In fact you’ll find yourself having to remind yourself that in fact this heavy hitter is in fact operating on DS hardware, its that impressive with little to no load times. Sound and audio are crisp and hilarious at times (citizens and their obscenities to your actions..gotta love it). Gameplay is very addictive and the missions more like mini games within the man storyline. You still have the option to take fairs in taxis and all the other side jobs you’d expect from a GTA title. Rockstar did not skimp on any of the details. Some cool things to note for example: if you carjack a vehicle..you’re in no problem…if you simply steal a parked car from a lot or anywhere you’ll need to 1st “start” it a number of different ways (its all random which the game will choose – crossing wires, code breaker, etc. in which you’ll use the stylus and touchscreen); also, now being able to find weapons in dumpsters, priceless! 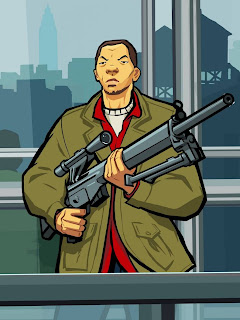 In short, great title. Rockstar surprised me with this one. If you are a DS owner and have been waiting for a something a tad more mature yet not too heavy, this is for you! I’ve even seen it on sale some weeks for only 20 bucks, a steal! GTA fans, its a must have, trust me. Worth buying a DS or DSi for…you betcha!

* Everything
* Wifi gaming option that open up many new possibilities

* Driving controls takes some getting use to, but waaaay better than previous console editions
* That it’s not the ‘cop gone bad’ scenario game GTA fans are all waiting for

Feed Your Console gives GTA: Chinatown Wars: 9 out of 10