Remember Arnold Schwarzenegger before he was the Governator? Back when he was the Running Man… How about a time before Mickey Rouke was putting it down in the Wrestling ring, as ex-con in Sin City known as Mavr? Mix in a healthy dose of Bruce Campbell’s chainsaw toting character ‘Ash’ from the Evil Dead series. Then imaging your in the the A-Ha’s “Take on Me” video. Mash all of these things together and you’ll find Sega’s MadWorld.

A black and white world with the occasional yellow and red accents… No wait make that LOTS of RED BLOODY accents. Take on the role of Jack, a new contender for the title of DeathWatch Champion, however Jack has another secret and an ulterior motives for joining the game. Comic fans will love the visuals and the in game dialogue cells, that feature Jack’s discussions with his Agent and other in game charterers to provide storyline information and guidance.

Make your way through the various game areas and complete the gruesome Bloodbath challenges (my favourite has to be the first you come across, The Turbinator – toss as many baddies as you can into the giant airplane turbine, get bonus points for multiple targets being pureed). Simple controls make this a game anyone can pickup (it is a Wii game after all). Move, jump and lock-on to enemies with your Nanchuck remote and control the attacks with Wii-mote – Punch, grab and CHAINSAW.

In the beginning your average street enemy is not that smart – they even line up for you from time to time and wait their turn as you kick their buddies ass – but after you move out of Varrigan City (the first set of levels) they smarten up and start dodging your punches and counter attacking. Boss fights give you the chance to block and counter their special attacks, via a series of hand shaking gestures, and a special hand movement (depending on the boss) to do some major damage.

DeathWatch commentators follow along with your progress providing a often times laugh out loud background track filled with colourful anecdotes and stories from their own long over fighting carers. Language and gory details about evisceration and disembowelment are abundant and to detailed to repeat here…

Scoring is based on your ability to inflict cumulative suffering on your enemies, ring them with a tire to pin their arms to their side, then shove a street post into the head only to finish them off will the Rose bush (a spiked wall) that finds you repeatedly pounding their body against it – only to leave them hanging. Ram an exploding bottle or fireworks down an enemies throat or pick them up and deposit them in a burning barrel… the possibilities are only limited by your imagination and the tools at hand (maybe it was your hand that was ripping out their still beating heart). 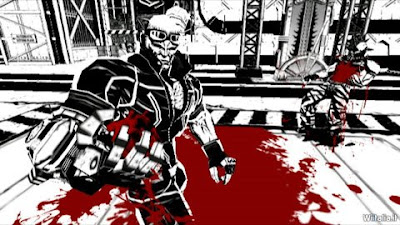 Two player mode finds you interacting with a partner in the Bloodbath challenges taking on two type of enemies and fighting to see who scores higher – beware killing the wrong kind of enemies can score points for your partner. This mode would have been better placed as a one v. one split screen where players are facing off against each other for bragging rights and supremacy over your friends. Even two player co-op would have worked for this game – offering more enemies and double the blood.

* Multiplayer limited to only in level Challenges – no vs. or co-op modes
* Multiplayer commentating gets old fast and is highly repetitive
* Game play can became repetitive as environmental weapons and tools are no needed to progress

Feed Your Console gives MadWorld: 8 out of 10