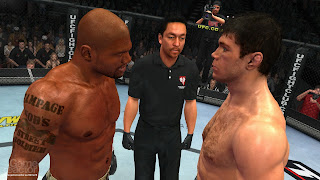 Available on PS3 and Xbox 360 (reviewed)

It’s 6am EST and I’ve been up for 90 minutes now and went to bed a scant 5 hours ago. With sleepy eyes and coffee #2 in hand, I write this review for all you ‘Feeders’ out there. Last night I made a monumental mistake and allowed myself to get so overly involved in the latest offering from THQ, UFC 2009 Undisputed, that I’m utterly paying for it.

This new instalment of after a 5 year hiatus couldn’t have come at a better time for the UFC. The MMA phenomenon is taking the world by storm with a hugely successful TV series, The Ultimate Fighter, big Pay Per View numbers and massive demand to host events worldwide – Especially here in Canada. Yesterday the wait was finally over and UFC 2009 Undisputed hit store shelves, but does it deliver on the hype or does it crumble like Thales Leites against Anderson Silva? Read on.

Undisputed features over 80 fighters across 5 weight classes as they go toe to toe in the octagon. The options once you get into the game are your typical fare anyone would expect to see: Exhibition, Create a Fighter, Career Mode and Xbox Live. The Create a Fighter mode isn’t as deep as the Smackdown series but there’s a whole lot less flash involved in the UFC so it was nice to see they kept it deep but simple. In here, players will choose the fighters appearance, and your fighting style. Each fighter has 2 styles to work with 1 being your Standing and Ground:

From there points are allocated into specific fighting skills to make your fighter a unique tour de force. The skill set includes: Standing Strikes Offence/Defense, Ground Strikes Offence/Defense, Grapple Strikes Offense/Defense, Submission Offense/Defense. Being that this fighter is primarily for messing around with, he’ll be able to hold his own against the pros. You can, however, move him over to the career mode where he’ll be considerably green around the gills and must be trained to play with the big boys.

The Career Mode has the fighter start out as a fresh face looking to make waves in the pond that is the UFC. In here is where you learn and train to become the best of the best by making sure the fighter gets enough rest, and trains properly for his next fight. Just like in real life, practice and dedication is what will separate the winners from losers. You control what days the player rests, spars or trains in a specific area such as Strength, Cardio and Speed and the level of intensity.

It’s tough to get an idea of where you should be putting all your effort at the beginning but once I found my stride I started winning fights (Hint: Cardio, Cardio, Cardio , Spar – then rest for at least 2 weeks before the fight to ensure he’s fresh). Take the time with you created fighter – Some people will try to burn through the game by going intense and it may work but where the fun? It’s more calculated when you really think about what kind of fighter you want to be.
With more victories come more sponsorships and “Cred” meaning you move up the rankings and get gym upgrades to help you attain the level of supremacy we all want. When your fighter just can’t seem to keep up, this is when it’s time to make like Chuck Liddell and walk away like the pro that you are but fear not. The fighter may be retired but he can still be used in exhibitions and online.

Online fights are fun. It’s interesting to see how other players built their player and most are good with giving you tips of how they created them. One of the things I wasn’t particularly happy with was the interface by which you host a match for you and a friend. It’s kind of confusing at 1st and I found myself fumbling around trying to figure out how to invite someone. Setting up a rematch is equally confusing and you need to hit start and offer up a rematch after the fight is done and you’re already out. Last night I also noticed a considerable amount of lag but figured it could either be my connection or day one server jitters. One of the fights I was in was so laggy, it was unplayable but after reestablishing a new fight it was much better.

The graphics are fantastic and the guys at THQ/Yukes should be extremely proud of this accomplishment because really captured the spirit and mannerisms of each fighter to an almost photorealistic quality it’s easy to get lost gazing at Arianny or Edith’s ….ermm… eyes as they walk down the steps with the ring cards in hand. The game features the voices of Joe Rogan and Mike GoldBerg as your color commentary but I found them to be just a little annoying to a degree. This isn’t exactly a deal breaker but they do tend to repeat themselves many times in the duration of a single fight.

I do fear that the casual players may find themselves a little overwhelmed at the number of moves in each fighter’s repertoire. To those people I suggest you spend just a little amount of time in the tutorial and you will see just how surprisingly smooth and fluid the controls really are. This is a damn good game and is sure to please even the most rabid fan despite some of the minor issues. THQ and Yukes have really delivered a true UFC fighting experience.