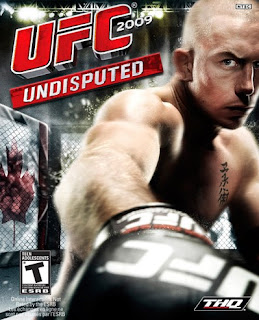 In case you’ve been living under a rock, you know that today marks the day that UFC 2009 Undisputed drops into stores everywhere. Recently we had the opportunity to ask some questions regarding the highly anticipated release UFC 2009 Undisputed. Myself and one of the other guys, Slayer Agamon, came up with a handful of questions to ask John Edwards, Senior Creative Manager at THQ. As big UFC fans, Slayer and I could easily have poked and prodded for a million other things but Mr.Edwards is a busy guy and we’d really like to express our thanks to John for taking the time out of his busy schedule to answer our questions. Expect a full review in the next 1-2 days.

Feed Your Console: THQ has plenty of experience with grappling games in the WWE titles – Did you create a completely new grapple system specifically for UFC? If so, is there any intention of moving that system over to the WWE brand?

John Edwards: The grappling gameplay in the WWE titles is dramatically different in both mechanics and philosophy from UFC 2009 Undisputed, so we did in fact have to create a brand new grapple system designed specifically to recreate all aspects of the MMA grapple game.

Feed Your Console: Having spent well over 6 hours playing the demo, it’s easy to feel and see the difference between Chuck and Shogun. How difficult was it to really capture the essence of each individual and unique fighter?

John Edwards: Making the individual fighters look and feel a close to their real life counterparts as possible was a key tenet during the development process, and luckily, as this title has a strong basis in reality, we had no shortage of reference to draw inspiration from. In addition to the development team’s own knowledge of the UFC as fans, we also had the pleasure of working closely with the UFC organization. Beyond simply supplying us with reference, they made themselves available at all points of the development process to make sure that we could create the most accurate representation of each of our 80+ UFC fighters.

Feed Your Console: With so many changes that occur in stats on a regular basis from ppv to ppv event, will you allow gamers the ability to update their games “stats” for all the players after each PPV event? (ie. wins/losses and when big name player switch between weight classes)

John Edwards: This is not a feature in UFC 2009 Undisputed.

Feed Your Console: With the UFC steam rolling the sports world as it is, does THQ and/or UFC have any intention of holding special online events to coincide with real life UFC events?

John Edwards: We cannot confirm any plans at this time.

Feed Your Console: One of our guys is a huge Matt Hamill fan and he’s not on the roster this year. How was the roster selection done this year and are there any plans to release downloadable fighters?

John Edwards: With a sport as popular as the UFC, unless we could manage to include every single fighter in the UFC, someone will be disappointed that his or her favourite fighter is missing. We worked very closely with Joe Silva and the guys over at the UFC to try and create a roster with the most relevant and compelling fighters at the time while also trying to plan ahead to see who was going to be popular or successful around the time that we shipped. Unfortunately that means for whatever reason some fighters were simply not able to be included.

Feed Your Console: We all know that Couture and Matt Hamill for some reason are not in the game. Couture we always knew was a problem child but why leave out Hamill one of the newest great inspirations to alot of upcoming fighters out there? Is it possible it’s just a timing issue and you will release players in the form of an update going fwd? We want the dirt!

John Edwards: As you can imagine, creating a title of this quality level takes quite a bit of time. Between the time the roster is finalized and the artists begin work on generating the models and when the game is finished, the UFC itself will have gone through many changes. Fighters that were once popular no longer are, fighters will retire or be released, or new fighters will join the ranks and make names for themselves. Unfortunately that means that in some cases popular upcoming fighters will simply not make into the game, as much as we would all like to include them. Hopefully the game is well received and we will get the opportunity to produce a sequel and expand the roster to include all of the new faces that make up the future of the UFC.

Feed Your Console: Will Dana White be an unlockable to play as?

John Edwards: Dana White is not a playable fighter for this year, but he is definitely a part of the game.

Feed Your Console: Did you guys think about having a story mode incorporated in the game? Where you create a player and have him go through the entire Ultimate Fighter type experience. Fight his way into the house then to a championship match and a contract? The possibilities of that type of story mode would be endless…

John Edwards: While it is not tied to TUF, we do have a Career Mode that allows players to create a fighter from scratch and experience the life of a UFC fighter. Players must train, spar and compete in UFC fights on the path to winning a championship belt, and in the case of exceptional fighters, be inducted into the UFC Hall of Fame. Fighters created in our Career Mode can be retired and used in any of the other single player modes or taken online to compete with other members of the UFC 2009 Undisputed community.

Feed Your Console: Can you explain briefly how the online experience will be different other than just player vs player across the airwaves?

John Edwards: As far as online features go, we support 1 vs. 1 Exhibition matches in either Ranked or Unranked play, with UFC fighters or fighters generated with the Create-a-Fighter feature. Ranked Matches contribute to an overall leaderboard where players can track their progression and see how they match up against the best of the best online. Unranked play allows players to select their opponents but does not contribute to the overall standings.

I think one of the major features that sets UFC 2009 Undisputed’s online mode apart from similar titles is the time that players can invest in the creation and customization of their fighter offline through Career Mode. I think players will really enjoy seeing how their personalized fighters can stand up online against other players’ created fighters and against the best that the UFC has to offer.