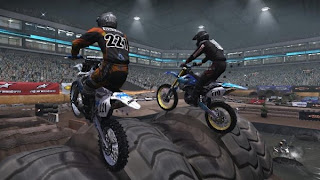 Early this morning THQ sent word around announcing the upcoming release of MX vs ATV Reflex on Sony Playstation 3, Sony PSP, Xbox 360 and Nintendo DS this holiday season. Personally I don’t have much experience with racing games because, well I’m just not very good at them but this is very good news for those of you out there who enjoy getting dirty on the mud tracks. Click here to see the full Press Release.