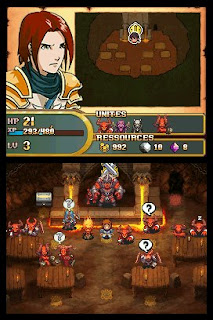 In a press release today, Ubisoft announced the launch of Might & Magic: Clash of Heroes on the DS, in August 2009.

Clash of Heroes will take players through five quests, where they will explore and solve puzzle battles, in classic Turn based style, to save the world of Ashan.

In a world populated by knights, elves, wizards, necromancers and demons, Might & Magic Clash of Heroes will be shown to players in a brand new manga-style art design (see photos).