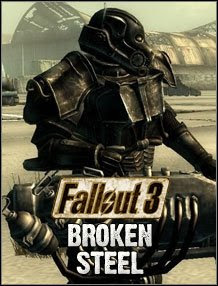 May 5th, Bethesda released the 3rd and probably not final expansion to the Fallout 3 universe in the form of Broken Steel but not without some minor challenges. As of the writing of this article, the DRM issue which plagued Games for Windows Live! has finally been corrected and is back up online while reports run rampant of buggy AI and a variety of other glitches. I’m not here to discuss that. Having just finished the latest chapter I need I will say that this is an extremely ambitious release.

Without giving away too much, Broken Steel picks 2 weeks after the original ending. The Brotherhood of Steel asks for your help in eradicating the last remnants of the Enclave. From there you’re thrust into 3 main quests (and 3 minor side quests)which are each worth 30 additional Achievement points.

– Death from Above: Sends the player on a mission to attack an Enclave base with the help of Liberty Prime
– Shock Value: Has you search for a part called the Tesla Coil
– Who Dares Wins: Takes you to Adams Airbase in a final climatic battle against the Enclave

For only 800 MS Points ($10), it had the greatest value of all 3 DLC packs. It added a great deal of extra gameplay of around 4-6 hours (took me almost 5), it boosted the level cap to 30, gave some incredibly cool new items and weapons, a few ferociously aggressive enemies fighting with the Enclave and one of the coolest levels in the game, the Airbase.

I actually enjoyed Broken Steel considerably more than the previous 2 DLC releases and I really liked them. As I stated earlier this is an ambitious chapter and it pays off. In complete honesty, I didn’t experience any of the glitches or bugs that others have been talking about but I think I did luck out on one that worked in my favour. Somehow, after the DLC was added, my Super Mutant friend Fawkes became impervious to harm and had an endless supply of ammo for his laser Gatling Gun. Without him, some of those new enemies I spoke of would have annihilated my sorry ass back to the stone ages.

Despite the launch issues on the PC with DRM problems, and the bug reports, I hope that other companies look at these chapter releases as a shining example of how you keep a damn good game fresh and in the consoles of fans everywhere. I know that they haven’t announced any new releases as of yet, but something tells me this won’t be the last time we’re talking about taking a walk to a strange new location in the Capital Wasteland. Personally I can’t wait for more.