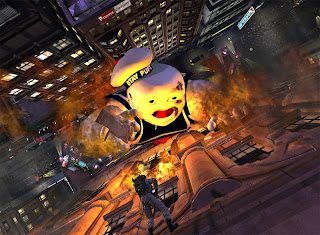 “Mother Pus Bucket!” That famous line from Bill Murray must be exactly what’s being said collectively by the powers that be at the Xbox and Nintendo camps. Today, SCEE announced that they would be the publishing the Playstation editions os of the highly anticipated Ghostbusters game in Europ and PAL regions. The Playstation 2 and 3 editions are expected to this June and on the PSP in the Fall. Atari will release versions for the Nintendo DS, Wii and Xbox 360 later in the year.

That’s a pretty big announcement for Sony and too bad for MS and Nintendo. I was actually looking to pick this up for the Wii but the gamer and huge fan in me won’t wait until the Fall to use the Wiimote to wrangle up Slimer.

To mark the 25th anniversary of the well-loved franchise, the game will launch in coordination with the Blu-ray release of the original hit movie and licensing programs from Sony Pictures Consumer Products Inc. Ghostbusters: The Video Game will launch in Europe and PAL regions on June 19th 2009 exclusively for PS3 and PlayStation 2.

“We’re committed to bringing the PlayStation family the biggest and best gaming experiences first,” says Mark Hardy, European Product Marketing Director at SCEE, “and it doesn’t get any bigger and better than this blockbuster title. This summer, PlayStation owners will be the first to grab their proton packs and fight the spirit world. We’d like to wish them the best of luck in their ghostbusting endeavours and, of course, to remind them not to cross the streams!”

“With our colleagues at Sony Computer Entertainment Europe publishing Ghostbusters: The Video Game, we are thrilled by the dynamic new Ghostbusters game. We think it will have tremendous appeal to gamers and we can’t think of a better way to celebrate the 25th anniversary of this beloved franchise.” said Mark Caplan, Vice President of Licensing-Interactive for Sony Pictures Consumer Products Inc. “With this superb game launching alongside the Blu-ray release, we will reach existing fans and the next generation, bringing them all into the irresistible Ghostbusters universe.”

“Atari is committed to maximizing the launch of the Ghostbusters videogame across Europe,” Said Jim Wilson, VP Worldwide Marketing, Atari. “In partnership with both Sony Pictures Consumer Products, Inc and Sony Computer Entertainment Europe, we have a unique opportunity to add new game products and expand marketing opportunities to reach Ghostbusters fans in Europe.”

Buckle your seatbelts folks. Something tells me this is going to be one hell of an E3.