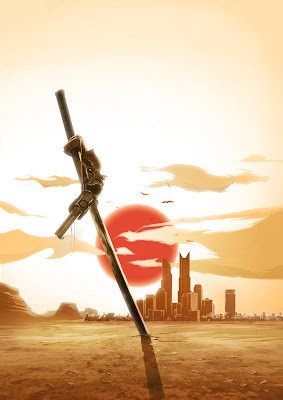 Today Ubisoft announced the upcoming sequel Red Steel 2 exclusive on the Wii. This will be the first Ubisoft title to use the Wii motion plus. Sharpen your Swords and get your guns out of storage – your going in to the desert.

Full Release:
Montreal, CANADA – APRIL 29, 2009 – Today Ubisoft® announced Red Steel®2, exclusively on Wii™ system from Nintendo. Red Steel remains one of the most successful Wii titles and the only brand created specifically for the launch of the platform. Red Steel 2 is being developed by Ubisoft Paris and will be available for the 2009 holiday season.

Red Steel 2 returns with an artistic style and flair created just for Wii. Set in a desert-bound, high-tech metropolis, Red Steel 2 is a revolution in the action-fighting genre, taking full advantage of the capabilities of the Wii MotionPlus™ accessory. Your movements are faithfully replicated on-screen, putting the emphasis on swinging, shooting and fun! With the ability of the Wii MotionPlus to sense the strength of a swing, you will literally be able to make an impact on your adversaries through power and precision.

“Red Steel was a unique opportunity for Ubisoft to work in tandem with Nintendo to create a title exclusively for the launch of the Wii console,” said Olivier Ernst, general manager at Ubisoft Canada. “Red Steel 2 is another milestone for the company as it is the first Ubisoft title with full Wii MotionPlus integration.”

Just as Red Steel broke ground as the only third-party brand created for the launch of the Wii, Red Steel 2 will be the must-have game of Holiday 2009 for those who wish to stretch their own capacities and fully experience a game that was built from the ground up to take advantage of the Wii MotionPlus.