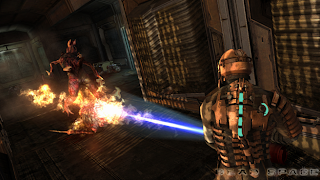 Every now and then there comes a game that’s sum is more than the total of it’s individual parts. Dead Space is one of those gems. I had a sense there was something special about this title when EA decided to release animated short films several months prior on XBL and PSN (which are still available and free). These shorts were creepy and you didn’t quite know what the heck was going on until maybe the 2nd or 3rd issue. Speaking of issues, these stories I was delightfully surprised to see also released as an actual mini series in my local comic book shop! Again, at this point I knew EA knew they had something special here and were pulling out all the stops. Next up, the DVD companion movie that was released right as the game dropped. Mind you I don’t know why they didn’t center around someone other than the obnoxious female lead. Regardless, it was still the perfect set up to a rather interesting and in-depth storyline.

Halloween ’08, enter Dead Space finally. Without giving out any spoilers here, you’re a lone science engineer, Isaac, sent to this space colony to see why communications were lost, access the damage, and possibly fix it, etc. Little do you know that the communications lost were due to some space marker found that turned people stone cold crazy, then mutated them into these creatures that are so terrifyingly real looking, it’s hard to play this game without the lights on. Seriously.

Graphically, I love how EA took their time on this one. It shows, right down to not having any map screen or inventory screen, but rather everything is instead on-screen in real time! Things like your ammo count you can see over Issac’s shoulder in the actual guns ammo count monitor, etc. Brilliant!

Sound quality is incredible. Think the entire Aliens series, where you hearing the dripping of water, creaks, screams, you name it. If you have a set up where you can enjoy 5.1 splendor, then you’re in for a treat. The soundtrack picks up when you encounter creatures and i found it almost freaking me out more than the actually battle did with whomever I was trying to dismember at the moment. The combination of both at times was too much and I had to stop playing to catch my breath. Yes, it’s that intense and I don’t scare easily! Again, brilliant.

The controls are decent. I found myself at times overwhelmed by mutated creatures though and just running for dear life. Maybe that’s the right thing to do in those situations. Just the same, you have limited ammo and findings are scarce if you don’t remember to check every locker, kick/crush every box, etc. A good balance of the rarity of ammo found made it even more terrifying as you have to plan carefully what to use and when. It could literally be a life or death decision. Let me not forget the fact that EA threw in some 0 gravity levels that completely nail down the physics of weightless adventure to a T. Love it.

I’m still enjoying this game as I can only play it in short chunks due to it’s scare the bejesus-out-of-me nature. I’ve played it enough though to review and say, if you’re into space horror, or horror in general it’s a gotta have. Especially since these days you can pick up a copy well below it’s original price in some shops.

– Graphics, sound, and plot are all top notch.
– Space horror at it’s best.- Enough prequel fodder to make you believe it’s real.
– Downloads a’plenty for extra weapons, skins, etc.
– It WILL scare the bejesus out of you.
– Announcement from EA of a prequel of sorts on the Wii out fall ’09

– It will scare the bejesus out of you!- Not enough ammo about. Get trapped and it’s game over man.
– The weapons management and upgrade system can get confusing at times (it’s still better than most).