Finally, divine intervention has set in and the next installment of the Street Fighter franchise is here!! I have to admit, I have been watching this game in development for close to 2 years now, and I had very high expectations. Let me say this, this game is on FIRE! Hot. Hot. Hot. Capcom must have made a deal with the devil or something because there last few games of late and forthcoming seem just flawless and literally too good to be true (ex. Resident Evil 5, Dark Void, etc.).

Visually stunning. The intro runs maybe close to 5 minutes long and you don’t even notice because you’re just hypnotized and in disbelief that humans actually created this masterpiece (the alt’ being cylons of course)! Gameplay graphics stay true to the watercolor styling at some points we’ve seen in the promos, and at others times the characters can seem “blocky/polygonal” (think ol’ school Virtua Fighter) during character intros right before a match begins. Most of the characters when playing in Arcade mode have an additional animated mini movie clip before the match even starts. This mini clip sets up why your chosen fighter decided to enter the tournament. This was a pleasant surprise and fans of the SF anime movies will eat it up. It seems as if there will be a some other SF anime movie coming out soon separate than the one included in the collectors edition (for example, you’ll notice Abel’s movie clip is not taken from the dvd in the collector’s edition). All in all, when you look at the character designs, the new backgrounds, even the drawn in animated facial expressions as fighters get knocked around, I can’t fault this game at all on anything graphically. 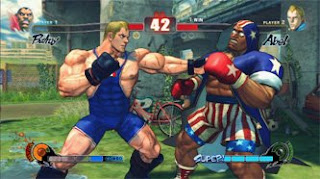 It’s a fighting game. I personally don’t care too much if fighting games have plots or not, but I guess when playing through the Arcade mode it has to have “something” per character. As mentioned above, it appears each warrior was given a mini-clip of background story bringing them back to fight once more. I like it. Short, to the point, and I was able to turn off the subtitles (I loathe subtitles in games). It’s good enough, we’ll leave it at that.

Spot on controls. Somehow I found it difficult to perform certain basic moves like Ken’s fireball when they released the HD ReMix, but here with SFIV it seems the controls are a bit more forgiving. Hurricane kicks, no problem. Abel’s Ultra Super, piece of cake. In short, yes even if you were never able to pull off some of the special moves in other iterations of the SF series..you probably be able to here.

On the Average setting (in Arcade Mode), it’s pretty tough to beat some characters. I found the most frustrating to beat, C.Viper and Sagat. There were times I couldn’t even get one hit off these guys and I’m an experienced SF player. With that said, I’m going to go off on a limb here and say most likely I will never choose the Hard setting..for I have already flung my controller across the room just on the Average setting alone. So long the days of Chun Li being the cheese queen, the throne is now bestowed by Ms. Crimson Viper. Take your bow Ms. Viper, take_your_bow…

Sound wise, incredible…sometimes too loud, but depends on your surround system possibly [grin].

So far, this may be the only fault I find with this otherwise stellar game. In every attempt where I purposely try to find others to play with, I can’t. I’m constantly rejected due to a party being full or for some random reason where the reason given is rather vague. However, if I turn on the network mode..then try to play the regular Arcade mode, I’m constantly interrupted with requests!! Where were these people just a few minutes ago?!! I don’t particularly remember being able to reject a match during Arcade Network mode either. Weird, as it seems unbalanced in that sense to me.