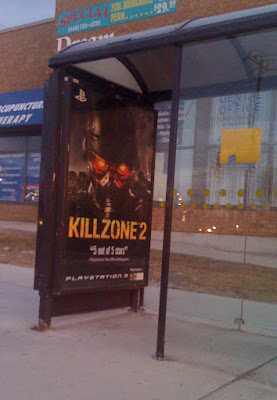 The Toronto Star is reporting that Sony will pull down their KillZone 2 bus shelter displays at approximately 300 bus shelters around the city. These ads for the new first person shooter are coming down after Sony started to receive complaints about its violent images and depictions of war.

Davis Mirza emailed Sony Canada after seeing these ads located near the Scarborough school he teaches at. The grade 4/5 teacher told the Toronto Star “My kids, who come from a lot of different countries, who have to experience violence, who basically come here to seek shelter and safety, that’s the stuff they don’t need to see,”.

Kyle Moffatt, public relations specialist for Sony Computer Entertainment Canada, notified the Star that the first ads to be pulled were from the bus shelter located right near the school Mirza works for. This happened Tuesday shortly after Sony had received Mirza’s complaint.

More ads were removed after the local councilor from Regent Park had made similar comments to Sony. This resulted in the decision from Sony to end the entire Killzone 2 bus shelter campaign just a bit early. “They were coming down at the end of the week; we just asked them to speed up the process,” Moffat told the Star. Sony PlayStation will establish an off-limits radius around schools for advertising in an effort to prevent this issue from reoccurring.

Kudos to Sony for taking these steps and being sensitive to community concerns.